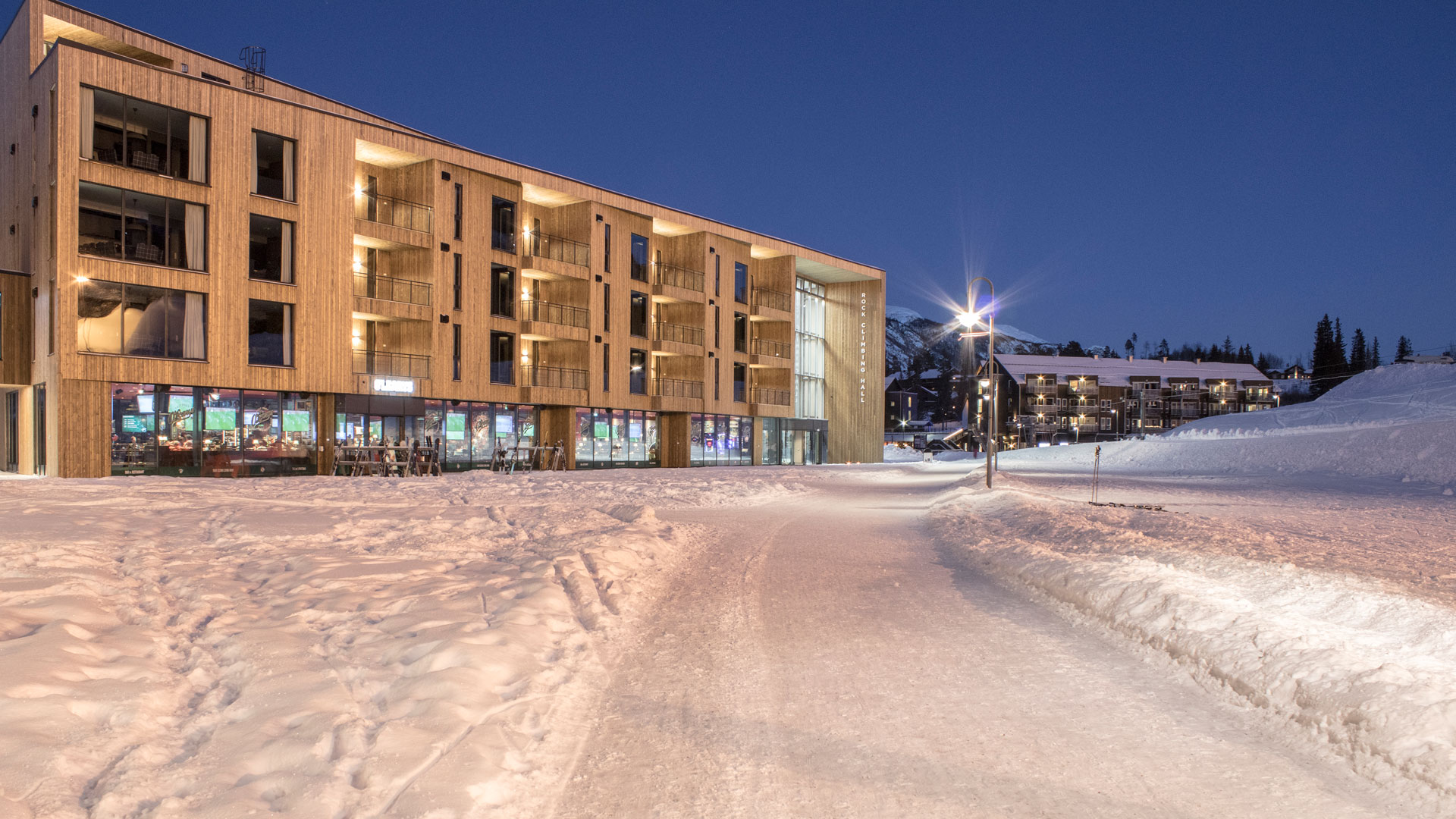 To create value, focus is placed on drawing up long-term development plans for future investments at SkiStar’s destinations.

Such plans create business opportunities through, for example, the sale of land and plots, building for rental, building for sale or to increase value in some other manner. This can either be carried out by SkiStar or in cooperation with other partners. As of the 2018/19 financial year, the Property Development & Exploitation segment encompasses non-current assets such as land, property and investments in co-owned companies.

Expanded and strengthened collaboration with PEAB

SkiStar and Peab have run Skiab Invest AB through 50/50 owner-ship since 2011. The company’s first project was to build eight apartments and a restaurant to rent in Björnrike, Vemdalen. In recent years, five hectares of land holdings have been exploited in Sadeln, Åre, where the company helped create six tenant-owner associations by selling off land. The seventh and final association will build 44 apartments with leasing and occupancy scheduled for the 2022/23 winter season. As of summer 2021, this collaboration has been expanded and strengthened by establishing the subsidi-aries Skiab Sverigefastigheter AB, Skiab Norgefastigheter AS and Skiab Projektfastigheter AB.

Skiab Projektfastigheter AB classifies Property Development & Exploitation under this segment. SkiStar has divested five areas of land for the planned operations in Sälen, Åre and Vemdalen to Skiab Projektfastigheter AB, which are mainly intended for accom-modation, with the exception of one area of land in Sälen which is earmarked for commercial buildings with a total gross floor area (GFA) of around 60,000 sq m.

SkiStar's land development assets and unsold plots total 5.4 mil-lion sqm (5.4). Most of the assets were acquired a long time ago and therefore have a low acquisition value. No market valuation of the assets has been conducted, as it is difficult to make a reasona-ble assessment of the possible exploitation rate of the land assets. Based on our own assumptions and experience, around 50 percent of the land can be built on, which is 2.7 million square metres. If the land is sold as plots, it would mean 2,700 plots, each comprising 1,000 square metres.

Land and plots for sale

At the end of the financial year, development land was available for sale in Ullådalen, Åre, and two plots in Björnrike, Vemdalen. In the Sadel area in Åre there is an additional detailed development plan in a fifty-percent owned joint venture for continued sales to newly formed tenant-owned associations.

SkiStar Vacation Club is a form of accommodation that is customised to meet guests’ demands and requirements. The apartments are divided into weekly units, and guests purchasing one or more of these units are entitled to the additional benefits of member-ship of the international exchange and placement organisation, RCI, as well as membership of SkiStar Vacation Club. This form of accommodation is cost-effective, simple and flexible for the time-share owner. Cost-effectiveness is achieved either through the utilisation of a purchased week, compared with the equivalent cost of renting for that week, or by exchanging the week with a trip abroad through RCI. In addition, the timeshare owner can pur-chase foreign trips through the RCI system. SkiStar Vacation Club also provides timeshare owners with a raft of advantages and benefits during their stay. The simplicity of timeshares comes from the fact that the guest is not responsible for the maintenance of their ownership share. Instead, the tenant-owner association, of which the timeshare owner automatically becomes a part, takes care of the maintenance and development. The apartment is always clean, the beds made up, and it is warm and ready ahead of the guest’s arrival. Flexibility is achieved as the timeshare owners can enjoy RCI’s entire range of over 7,000 destinations worldwide. SkiStar Vacation Club is currently offered in Sälen, Vemdalen and Åre, however, the intention is to roll out the concept to more destinations.

The investments expected to be used in the Group’s own opera-tions amounted to SEK 166 million (366) during the financial year. In Sälen, this relates to the completion of the fourth and fifth stage of Solbacken in Tandådalen with a further 74 apartments.
Construction is under way on SkiStar Lodge Hundfjället, along with the redevelopment and renovation of premises for restau-rants, conferences and swimming at Hundfjällscenter. Furthermore, construction has begun on premises for a SkiStarShop Concept Store and planning for tenant-owned apartments in Timmerbyn Village. SkiStar Lodge Hundfjället was divested to Skiab Sverigefastigheter AB, which will complete construction by the 2021/22 winter season in line with previous planning. The Concept Store and Timmerbyn Village were divested to Skiab Projektfastigheter AB for further management.

In Lindvallen, Sälen, land was divested to Skiab Projektfastigheter AB with the aim of constructing some 40 tenant-owned apartments in two stages, with construction beginning in spring 2022. Other land containing two development rights for commercial operations in Lindvallen, Sälen, was divested to Skiab Projektfastigheter AB. Construction has begun at one of the development rights on a SkiStarshop linked to the Concept Store, which will be rented out to SkiStar. Construction of apartments for sale was begun during the year in Hemsedal in an area known as Fjellnest. The project includes 69 apartments in four stages, of which 36 are included in the first step. Work to produce detailed development plans for all destinations will be intensified with the aim of preparing for new development projects. In Åre, planning for an expansion of Rödkullen and a restructuring and extension of Björnen Centrum is continuing. These two projects are being conducted together with other developers in each area.